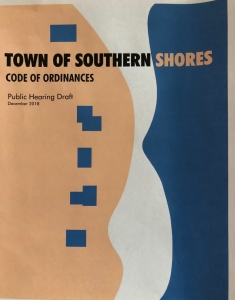 During an interview that The Beacon had last June with then-Town Planning Board member Elizabeth Morey, she said that she thought Town Code update/rewrite consultant, Chad Meadows, had submitted an “unacceptable work-product.”

And she told me I could quote her on that.

Until today, I have had no reason to quote Ms. Morey, who, as of Jan. 22, is the chairperson of the Planning Board. Today, however, I have attempted to access Mr. Meadows’s December 2018 “public hearing draft” of the proposed new Southern Shores Town Code of Ordinances, and I could not help but recall Ms. Morey’s assessment.

This 381-page document is big and bloated and, despite Mr. Meadows’s express goal of making the Town Code more “user-friendly,” it is decidedly unfriendly. (In my opinion.)

The new Town Code does not make a good first impression.

I am not a fan of its page layout—the font size, “navigational aids,” heading text, etc., that Mr. Meadows refers to as “technical changes” and justifies as “modern.” I think they, as well as illustrations and graphics (for example, flow charts, summary tables), just get in the way of important business. They make the Town Code of Ordinances appear busy, distracting, and even frivolous. I prefer well-chosen words.

Style aside, however, The Beacon believes that, at the least, Mr. Meadows should prepare a summary of all of the substantive changes that he integrated into the current Town Code. What key regulations, or sections thereof, were deleted, revised, added?

Mr. Meadows knows the issues of most concern to property owners, who are the ultimate “stakeholders” in this project. He should address them directly.

As the draft is now, you have to go painstakingly through it, finding the new number for the chapter you’re interested in and then perusing a lot of verbiage, much of it unnecessary, to find what you’re looking for.

While doing such perusing today, my thought was one that Ms. Morey expressed more than six months ago: “The consultant needs to do a better job.”

Mr. Meadows started the “Town Code Update Project” in September 2015, over the protests of many resident homeowners, 44 of whom signed and submitted a letter to the Mayor and Town Council on Jan. 4, 2016, asking that they suspend the consultant’s authority immediately. (I was one of the signees.)

“Contrary to repeated representations by TOSS [the Town of Southern Shores], including in its Dec. 22, 2015 holiday newsletter,” the homeowners wrote, “the project team will not be merely ‘correcting conflicting and ambiguous language in the Code, addressing recent changes in state and federal laws, and reorganiz[ing[ some sections to make the Code more user-friendly and easier to understand.’ Rather, it will be substantively assessing—and, to a great extent, already has assessed—the Town Code for the purpose of drafting new building and other laws to propose to TOSS for codification.”

There is little doubt that the December draft goes far beyond the Code cleanup that Town Manager Peter Rascoe described in FY 2015-16 budget hearings: Mr. Meadows did not just edit for consistency, clarity, and conformity with state and federal law. His Code rewrite is essentially a new planning document for Southern Shores.

The Planning Board began its review of Mr. Meadows’s work, which was organized into several “modules,” in April 2017. Current regular members Joe McGraw and David Neal were on the Board then, but Mr. McGraw, who is vice-chairperson, was an alternate until September 2017, when he was appointed to a regular, full-voting seat. Sam Williams was the chairperson.

The Town Council “dumped the Code rewrite on us,” Ms. Morey told The Beacon on June 29, 2018, “and it doubled or tripled our workload.”

The Board’s review, she continued, “was made more difficult by how the consultant presented the Code. . . . It was extremely difficult to determine what was old and what was new.” Such difficulty should have been corrected by the consultant.

Although the December 2018 draft does not look the same as the Code rewrite version that the Planning Board spent months reviewing, it still suffers in the presentation. The public, the Planning Board, and the Town Council still cannot readily distinguish old from new, not without great commitment of time and task.

Before a final draft reaches the Town Council, the Planning Board, whose membership now includes Andy Ward and Ed Lawler, must consider it for recommendation. The Beacon strongly encourages the new Board to take a fresh look and to hold Mr. Meadows accountable for an easy-to-read written summary of changes. No public official should be recommending or approving a code of ordinances just to move it along.

Fundamentally, The Beacon finds that the revised page layout, the new graphics and illustrations, and, most of all, the excess verbiage (such as the proposed “Purpose and Intent” sections, but also the language of the regulations themselves) just obscure the core substantive content, and in a code of ordinances, content—the regulations governing the Town of Southern Shores—is everything.

This draft cries out for another independent review—of the zoning chapter and any other important regulations identified by the public and the Planning Board.

A final note for those of you who are inclined to plunge into the December draft: You’ll find before the Code a section titled “Guidance from Code Assessment.”

“Code Assessment” refers to a document prepared by Mr. Meadows in October 2016 that purportedly summarized the “input” he received from the Town Council—Mr. Meadows interviewed members of the 2011-15 Council, all three of whom were defeated for reelection in November 2015; the Planning Board; the Town Manager and other Town staff; and about 900 respondents to a public survey, which was controversial for alleged bias in the framing of questions.

You may access this more than two-year-old document here: https://www.southernshores-nc.gov/wp-content/uploads/2015/10/TOSS-Code-Assessment-Final-10-3-16.pdf. The December draft does not include updates since October 2016.

Each chapter in the draft also has a blue-highlighted section titled “Guidance from Code Assessment,” which refers to this document and will not be a part of the finalized Town Code. None of the blue-highlighted language in footers throughout the draft will be part of the final draft, either. That this language is included in the draft just makes processing it all that more tedious. Perhaps the Planning Board, which presumably did such processing, could release a report on how it tackled it.

The Town Code Update Project has taken far longer than anyone anticipated. The Beacon trusts that Town officials will take even longer to ensure that they know and approve all significant changes within the proposed draft and communicate them to Southern Shores property owners.

Join 797 other followers
Follow The Southern Shores Beacon on WordPress.com