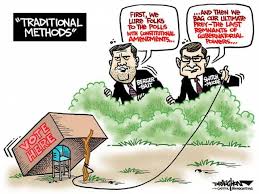 The current version of the N.C. Constitution was ratified in 1971 and has 14 articles. It is the third Constitution in state history, the first of which was created in 1776 after the Declaration of Independence.

Before continuing the discussion I began 10/20/18 about the six proposed constitutional amendments on your November election ballot, I’d like to provide some background on our Constitution.

Since 1971, there have been more than 20 amendments to the N.C. Constitution, the majority of which extend the rights of N.C. citizens or extend the government’s ability to issue bond. One notable exception, which you will recall, is the amendment added in 2012 to limit citizens’ rights by preventing recognition of same-sex marriage. That amendment defines a marriage between one man and one woman as the only legal domestic union that North Carolina will recognize.

Some of the other significant amendments made since 1971 include:

*Prohibition of all capitation and poll taxes.

*The grant of veto power to the Governor.

*The requirement that the State run a balanced budget.

*The allowance of the Governor and Lieutenant Governor to serve two consecutive terms (previously, like Virginia, North Carolina limited these office holders to one term).

And, relevant to the proposed constitutional amendments on the 2018 election ballot:

*The addition of a Victims’ Rights Bill to the Declaration of Rights.

*The creation of a State income tax to be computed on the same basis as the federal income tax.

The six proposed N.C. Constitution amendments are “legislatively referred” amendments that are on the ballot because a 60 percent supermajority of the members of both State houses approved them. They did not come out of a constitutional-convention process. A simple majority of voters is needed to pass the amendments, which the Governor cannot veto–which, of course, is the point. I consider all of these amendments to be back-door legislating and worse.

The remainder of this blog is an editorial, suitable for the op-ed page of your local newspaper. I will express my opinion.

The six amendments would stamp what is currently, not historically, considered “Republican” philosophies on state spending, elections, and governance. If the Democrats held a supermajority in the State legislature and referred these amendments, I would be equally opposed to them. The legislature should pass either new statutes or statutory amendments and leave the Constitution alone, except when a constitutional amendment is necessary and essential. The Constitution should not be used as a political football.

In the order that the amendments appear on the ballot, they are:

As I mentioned in my 10/20/18 blog, North Carolinians already have this right secured in Art. 1 of the N.C. Constitution, aka the Declaration of Rights, and it does not need protecting.

What the amendment actually does is 1) to acknowledge that this right may be exercised by the use of “traditional methods,” a term that is not defined, and 2) to limit the N.C. General Assembly’s ability to regulate hunting and fishing. The amendment also makes “public hunting and fishing” the “preferred means of managing and controlling wildlife.” A controlled hunt, therefore, would seem to trump other legislative efforts at control.

Finally, as the Judicial Voter Guide 2018 points out, the amendment says nothing about its effect on local laws that regulate public safety or commercial hunting and fishing.

Known politically as Marsy’s Law, this amendment would add a SECOND bill of victims’ rights to the N.C. Constitution, which the State budget office estimates in a public fiscal note accompanying the legislation would cost about $11 million per year to implement. The N.C. Administrative Office of the Courts reportedly has said that implementation would cost more than $30 million annually.

In 2009, Broadcom co-founder and billionaire Henry Nicholas III founded “Marsy’s Law for All,” in memory of his sister, who was murdered, in order to lobby for passage of victims’ rights amendments to state constitutions and the U.S. Constitution.

Marsalee (Marsy) Nicholas was killed by an ex-boyfriend in 1983. Mr. Nicholas and his mother were not informed of the killer’s release on bail, a week after his arrest, and unexpectedly encountered him in public. They were understandably shocked and appalled.

The N.C. Constitution already encompasses the right of victims to be informed of, and present at, proceedings (such as bail hearings) related to the accused; to be heard at sentencing; to be informed about the crime, the criminal justice system, and rights and services available to victims; to confer with the prosecutor, and much more if the crime is a major felony, a domestic violence case, or one of several other kinds of serious crimes.

If passed, the Marsy’s Law amendment would expand these rights to victims of all crimes against the person (including misdemeanors) and felony property crimes and all crimes (“delinquent” acts) committed by juveniles. It would guarantee all victims the rights of reasonable and timely notice of any court proceeding, upon request; to be present at any proceeding, upon request; to be reasonably heard at more court hearings, etc.

The amendment directs the General Assembly to create a procedure, by motion to the court, for a victim to assert all of his or her rights.

I am 100 percent in support of victims’ rights, but I do not support a legislative expansion of the excellent victims’ rights bill that currently exists by bamboozling the public with emotional appeal and vague representations. I am also concerned about the rights of juveniles, many of whom are not hardened criminals.

If the General Assembly wants to give crime victims more rights than they currently enjoy in North Carolina, it should amend the statutory provisions that currently exist under the victims’ bill of rights. It should go through the regular lawmaking process.

The current maximum allowable income-tax rate in our state, as specified in the Constitution, is 10 percent (10%). The individual income tax rate is currently 5.499 percent, and the corporate tax rate is 3 percent. In North Carolina, income taxes historically fund services related to public health, education, and safety.

I put this amendment in the “if it ain’t broke, don’t fix it” category. The proposed amendment, as the Judicial Voter Guide 2018 notes, does not include any exceptions. In times of recession or disaster, the State may need to raise money for core services. I would rather see a temporary spike in the tax rate to 7.00001 percent than an increase in sales taxes or borrowing. Sales-tax increases historically harm middle- and low-income people more than high-income people.

As I said 10/20/18, this vague amendment leaves requirements up to the General Assembly to figure out after the election. There are no details in the amendment about which types of identification will be permitted or whether any exceptions will be made.

You may recall that the Republican legislature’s previous attempt to require a photo ID—known as the Voter Information Verification Act—was struck down by the U.S. Court of Appeals for the Fourth Circuit in 2016 as unconstitutional racial discrimination. That law required voters to have a photo ID when casting a ballot and also reduced the days for early voting, eliminated same-day voter registration, and prohibited county elections officials from counting out-of-precinct ballots. These latter practices are used disproportionately by black residents.

The N.C. General Assembly pushed through the Voter Information Verification Act in three days in July 2013, a month after the U.S. Supreme Court invalidated Section 5 of the Voting Rights Act. Section 5 required states and communities that have a history of racial discrimination to seek federal approval (“preclearance”) before making changes to their election laws. Forty of North Carolina’s 100 counties were under this requirement.

Although there is reportedly evidence of alleged voter fraud in absentee voting, N.C. legislators did not require photo IDs for absentee voters. According to the Fourth Circuit’s opinion, white residents are more likely to vote absentee than black residents.

If the proposed amendment passes, it will assuredly be challenged in the courts.

The bottom line here is it’s a power play by the General Assembly to control judicial appointments that occur when a judge leaves office before the end of his or her term.

If the amendment passes, the legislature also could use its newly granted power to choose unelected N.C. Supreme Court justices for two vacant seats that it would create under its constitutional authority. These legislatively chosen judges would serve for up to four years before voters could elect or replace them.

As I earlier mentioned, the General Assembly could alter the current seven-member N.C. Supreme Court, which has a 4-3, Democrat-Republican, majority to a 5-4, Republican-Democrat, majority. Associate Justice Barbara Jackson, who is running for re-election, is a Republican, so the GOP does not gain a seat by her victory.

Currently, the Governor appoints an interim judge, who, in most instances, according to the Judicial Voter Guide, holds office for less than two years, until voters get to decide the seat at the next general election. The constitutional amendment would take this authority away and give it to the General Assembly, which would choose two or more finalists for the appointment from among those reviewed by a “nonpartisan” commission comprised of appointees. The Governor would then choose one of the prescreened and approved finalists. If he/she did not appoint someone from the legislature’s list within 10 days, the legislative would elect someone to fill the judicial vacancy.

The “judicial merit” commissions at the state and local level that would be created if this amendment passes would evaluate the qualifications of judicial nominees for the Supreme Court, the Court of Appeals, and the county superior courts. The local district courts have a different system in place. Nominees would be considered “qualified” if they were licensed to practice law in North Carolina; registered to vote; and not of mandatory retirement age. That’s it.

The proposed amendment does not include details about how the commission members would be selected or how many from each branch of government would be appointed, nor does it address how individuals would be nominated to the commissions for consideration.

I say: NO WAY. That we have elected officials who actually believe this premeditated legislative takeover of judgeships and the N.C. Supreme Court is a legitimate exercise of authority in our constitutional republic disgusts me. I don’t care what political-party affiliation they claim.

Please note: There already is a Bipartisan Board of Ethics and Elections Enforcement.

Please note again: The board, which administers ethics, elections, and lobbying law, is already bipartisan.

The truncated language on your election ballot is misleading. It suggests that you are voting to create a new board.

This proposed amendment is the General Assembly’s attempt to overturn a N.C. Supreme Court decision that prevented it from reducing the current nine-member Bipartisan Board of Ethics and Elections to eight members. The GA passed a law establishing an eight-member board in 2017, which the Supreme Court struck down as unconstitutional because it usurped executive authority.

This is yet another power grab by the Republican General Assembly.

Currently, the Governor appoints eight of the nine members of the Bipartisan Board of Ethics and Elections Enforcement, based on nominees submitted by the State chairs of the two political parties with the highest number of registered affiliates (Republican, Democrat). The ninth member represents unaffiliated voters and is nonpartisan. The Governor appoints him/her from nominations provided by the other eight members.

Removing the ninth board member obviously permits a 4-4 partisan deadlock vote on important issues, such as early-voting opportunities.

If this amendment passes, according to the Judicial Voter Guide, the Constitution would authorize only the second board in its history. That’s going back to 1776. The other is the State Board of Education.

CORRECTION: In my 10/20/18 blog, I incorrectly said that N.C. Supreme Court Associate Justice Sam J. Ervin IV is the son of former U.S. Senator Sam Ervin, who presided over the Watergate hearings. In fact, Justice Ervin is Senator Sam’s grandson. I apologize for the error.