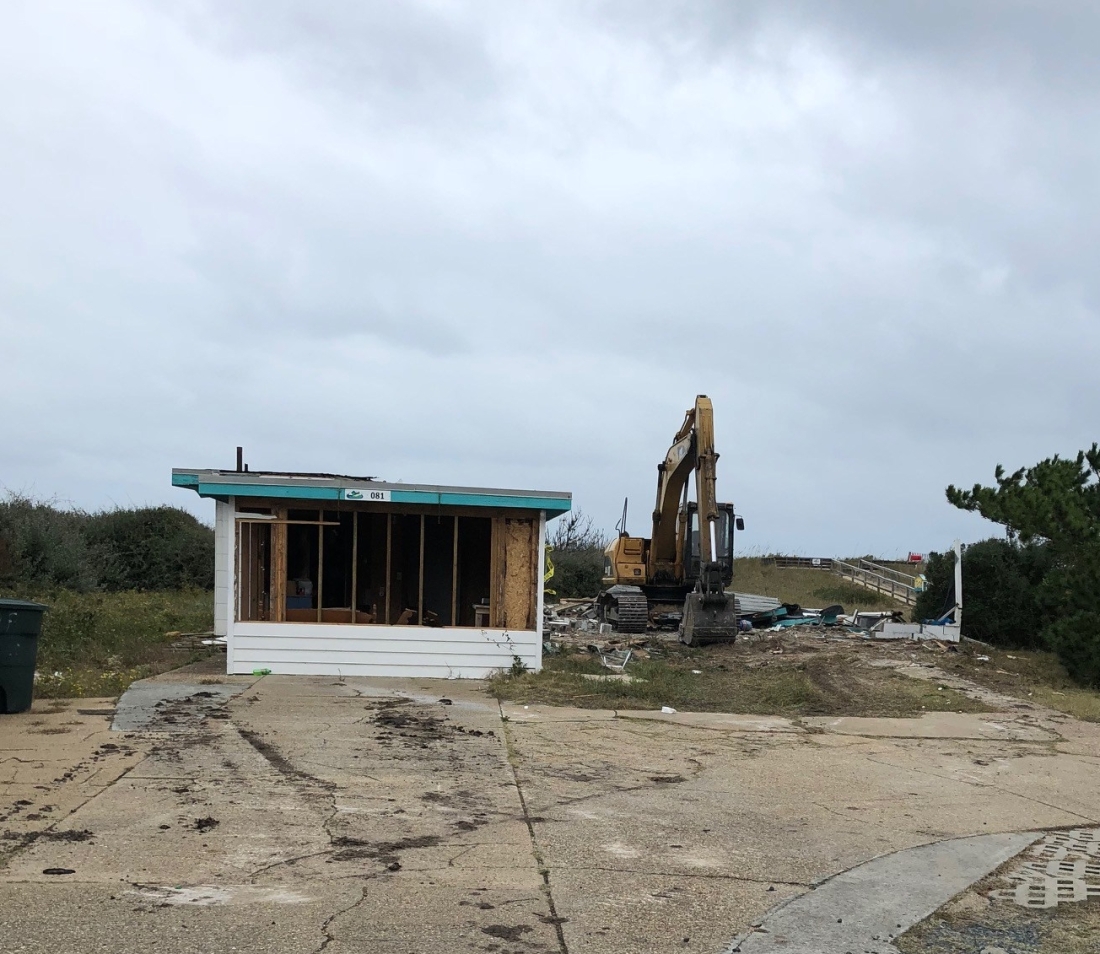 Before I delve into the details of yesterday’s surprise motion, I’d like to return to a question that all interested Southern Shores property owners have, but wasn’t adequately answered by the Town Council during the special meeting: Can the Town stop the two proposed SAGA houses?

The Mayor said at the beginning of yesterday’s meeting that the Town could not deny the two CAMA permits that were issued. It had no choice. I dispute this, and I, along with at least six other property owners, have filed with the N.C. Division of Coastal Management petitions for third-party hearings on appeals of these permits. Our goal, albeit a long shot, is to secure a suspension of the permits first, and then a rescission.

The process we have invoked is a State administrative process, and it has no bearing on the local-permitting process. No “stay” (stoppage) in the local process has occurred because of our petitions.

When SAGA’s proposed 16-bedroom wedding-destination structure at 64 Ocean Blvd. became public knowledge, the developer was not in the permitting process. According to Town Attorney Ben Gallop, whom I asked yesterday after the morning meeting, SAGA had not filed an application for any permits, so it was in a different legal position than it is now with the properties at 98 Ocean Blvd. and 134 Ocean Blvd.

SAGA has received one local lot-disturbance permit for 98 Ocean Blvd., allowing it to do demolition. I am not aware if it has filed an application for the building permit.

SAGA does not yet own 134 Ocean Blvd., so it cannot apply for any Town permits.

I am not a land-use lawyer. I do not know zoning law, like the back of my hand. But I am adept at legal research, and I believe I could have come up with an option that gives the Town a fighting chance to stop the construction of SAGA’s proposed houses. There are always “legal hurdles to overcome,” as Mr. Gallop said before enumerating the options that he did not recommend. But sometimes it’s worth the time and money spent trying to hurdle them.

As I said in an earlier blog this week, the Town Attorney works for us. We are the Town, and we have spoken out loudly against these structures. It would appear that we were heard, but not listened to.

As The Beacon reported yesterday, the Southern Shores Town Council unanimously passed a motion at the special meeting on high-occupancy houses to direct Town staff to work with the Town Planning Board to draft a zoning text amendment (ZTA) that it believes would prevent future developments like the 12-bedroom structures that SAGA Construction proposes to build at 98 Ocean Blvd. and 134 Ocean Blvd. The ZTA would do two things:

1)      create an “overlay” zoning district that would consist of properties east of N.C. Hwy. 12 and properties that abut the west side of Hwy. 12 and

2)      set forth zoning regulations, such as building height, lot coverage, and parking restrictions, etc. (see below), for properties in the overlay district that would depend upon whether the houses on these properties were 4,000 square feet or smaller or between 4,000 and 6,000 square feet.

Councilman Jim Conners made the motion, and Councilman Chris Nason seconded it. The following is the text of the motion that Mr. Conners submitted to Town Clerk Sheila Kane yesterday, and she kindly forwarded to me, at my request:

“I MOVE that Council direct Town staff to draft a proposed zoning text amendment to the existing Town Code, for Council’s review at its December meeting, proposing an oceanfront area residential overlay district to encompass all properties east of N.C. Hwy. 12 and those properties abutting the west side of N.C. Hwy. 12, as well as development standards for this overlay district that will include the following:

rear setback of 25 feet for all structures or as established by CAMA regulations;

impervious paving setback of 10 feet from side property line for structures up to 4000 SF;

impervious paving setback of 15 feet from side property line for structures over 4,000 SF and no greater than 6,000 SF

When I heard this motion yesterday, my thoughts were, in order:

Setbacks: How do these requirements square with the setback requirements in restrictive covenants of deeds? I know they’re there because I’ve seen them. The covenants differ by blocks, but a setback from the road (Ocean Blvd.) of 25 feet was standard in many deeds of oceanfront properties. Side setbacks were typically 10 feet.

Trashcans: OK. No big deal, but a permissible regulation.

Landscape buffers: You must be kidding. So now my siblings and I, who own a 1,700-square-foot oceanfront cottage that our parents built in 1971, have to plant landscape buffers, which we don’t like, don’t need, and have no interest in paying someone to tend, or—what?— we’ll be fined? The landscape police will be after us? We don’t care for landscaping and lawns. We like the wild, natural, untended look. So, not only would we be coerced into planting vegetation that we don’t like and we don’t want, we would be coerced into planting vegetation buffers 10 and 15 feet wide!! That’s huge and expensive, especially on deep land parcels, like the one we own.

Frankly, when compared to such governmental overreaching, SAGA starts to look good. Is it a coincidence that Mr. Conners is in the landscaping business?

I know that the “use of buffering or screening to minimize visual impacts, to mitigate the impacts of light and noise, or to protect the privacy of neighbors” is permitted under N.C. General Statute §160A-381, the building designs law that the State Legislature amended in 2015, resulting in the bedroom restriction being invalidated, but this is ridiculous.

Parking: How large is the standard parking space? Ten-by-20 seems large to me. I like the idea of prohibiting “stacked” parking, but how is that defined?

My bottom-line assessment, without doing a lot of thinking, is that while I generally like the overlay district concept, as framed in the motion, it seems way too complicated to establish and administer. I also envision many challenges to it. The arbitrary differentiation of house sizes is especially problematic. And, when questioned by Councilman Gary McDonald yesterday about the area covered by the district, Mr. Conners defined a very broad area that includes all west-side properties along Duck Road and along Ocean Boulevard in the 25-mph zone, north of the fork in the road. There is considerable diversity in the size of lots in this broadly defined area.

Would all existing developed properties be “grandfathered” in? If so, what happens when they’re sold and houses are torn down?

I am in Mr. McDonald’s camp about new regulations to control high-occupancy houses: Make them simple. I was disappointed yesterday that his ideas were summarily dismissed by Councilman Conners, Mayor Tom Bennett, and Councilman Chris Nason. These three had clearly conferred before the meeting and settled on the overlay district/regulations within the district as the way to go. I believe more open-ended discussion in a public forum should have occurred before yesterday and before a motion was prepared.

The State’s open meeting law exists for a reason, and that is to ensure that government officials do the public’s business in the open and on the record. When members of public bodies, such as the Town Council and the Planning Board, arrange to have no more than two of their members sitting down in the same room for a meeting—but then later call, email, or text a third member, thus involving a majority of that body—they may not violate the letter of the open meeting law, but they tamper with its spirit and intent. Such public-body members should seriously think about holding more public meetings.

Two meeting scheduling changes made since yesterday morning’s meeting affect the progress of the proposed ZTA: First, Planning Director Wes Haskett announced last night that the Planning Board’s Nov. 26 meeting, which was a rescheduling of its Nov. 19 meeting, has been canceled because no applications have been received. Why the Planning Board needs to receive applications in order to meet and continue its ongoing business eludes me. Second, the December meeting of the Town Council has been rescheduled from Dec. 4 to Dec. 11, at Councilman Fred Newberry’s request. Mr. Newberry is having knee surgery earlier in December.

As I reported late yesterday, the Town Council unanimously voted to approve construction of the new $5.4 million SSVFD fire station and to fund it. It also unanimously approved the new 10-year fire services (FY 2019-2029) contract with the SSVFD.

As The Beacon reported 11/5/18, A.R. Chesson Construction Co. of Elizabeth City submitted the winning bid for the fire-station project of $5,409,223. The SSVFD selected United Financial of Asheville to service the debt. United Financial offered financing over a 25-year term of $5,419,223, at an initial interest rate of 3.71 percent. The interest rate would be fixed for the first 10 years and reviewed at the end of the 10th year. The mortgage amount includes $10,000 over Chesson’s bid to cover “regulatory inspections as required by code,” according to SSVFD Chief Edward Limbacher.

Town Manager Peter Rascoe informed the Town Council last night, as he did in a Nov. 1 memo, that if the Town Council took on this debt, the impact on the Town’s annual budget, starting in FY 2019-2020 and continuing for at least nine fiscal years thereafter, would be an additional annual expense of $333,551.96, if the debt were paid in quarterly payments, or $334,484.78, if it were paid in two semi-annual payments.

I leave more numbers about where this money would come from—a point thoroughly discussed at last night’s meeting—for another day.